One-Eyed Kings: Lessons I Learned from an Incurable Disease

James V. McTevia did not intend to write his most recent book. But he also did not intend to contract a disease dauntingly named inclusion body myositis (known as, yes, IBM to the 20,000 Americans acquainted with it firsthand).

IBM is a muscle disease that attacks the legs and the fingers, leaving its victims unable to button a shirt and, more importantly, unsteady of gait. It's the same disease that recently struck rock star Peter Frampton. It is incurable.

ONE-EYED KINGS: Lessons I Learned from an Incurable Disease began as McTevia's way of raising visibility for IBM research, but the book turned out to be an inspiring and even witty narrative of how he has confronted this totally unexpected foe.

Continuing to crisscross the country as a consultant and outside director serving on numerous corporate boards, the busy McTevia refers to IBM as "my irritant" and shows no signs of phasing out of his long career. Instead, he hopes his work schedule and One-Eyed Kings will inspire IBM victims and indeed those enduring any adversity.

With a prologue by Dr. Thomas Lloyd, co-director of the Johns Hopkins Myositis Center.

The Culture of Debt: How a Once-Proud Society Mortgaged Its Future 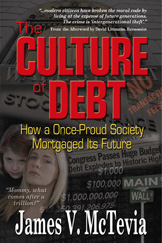 As the foremost pioneer of what has become a growth industry in America – turnaround management and the liquidation of failed companies – James V. McTevia knows all too well whereof he speaks – he has seen the ravages of debt addiction in every form, from every angle.

In THE CULTURE OF DEBT, the brilliantly written follow-up to his earlier book BANKRUPT, McTevia writes, “…news media have been consumed almost every day by a version of the fiscal story no one wanted to talk about in 1993. Late in 2008 our society’s runaway train of debt, unfunded entitlements, and endless promises of still more goodies tore around a curve leaning – from engine to caboose – within an inch of tipping into a bottomless fiscal gorge. Many or most of the world’s economies stood a good chance of being dragged onto the same debris heap. In short, the message of BANKRUPT has proved accurate.”

McTevia has turned around scores of businesses in North America with sound financial strategies that minimized pain and losses. But for every successful turnaround, McTevia has had to give hundreds of people the news that their jobs are gone and had to tell owners their once-thriving business is defunct. Regrettably, as a liquidator of failed companies, McTevia presides over one of the few thriving industries in a deeply troubled economy.

“Debt-addicted individuals and institutions,” McTevia writes, “given half a chance or less, will keep borrowing money and live further into the future than even science fiction could predict. It appears possible the most powerful nation on Earth will find ways to loot the future all the way into our great-great-grand-children’s bank accounts before we come to our senses – voluntarily or otherwise – about discipline and the ultimate need to repay what we borrow.”

Is there a way out? Yes, but is there the will, McTevia asks. “The way out of financial crisis and the path to fiscal sanity is simple and obvious. It is no secret. People and governments – especially governments – nonetheless pay no attention.”

In plain, straight talk, McTevia analyzes how and why America got itself into such fiscal peril – and what it must do to regain the fu¬ture for its grandchildren.

“One decade into the 21st Century, many millions of Americans are not poor, but are impoverished of spirit. They are not stupid, but are uncommonly ignorant. Are they ‘living in some future financial utopia,’ rather than in the real world, as Jim McTevia thoroughly nails it? No doubt.” — From the Afterword by David Littmann

“Jim McTevia's The Culture of Debt grabs the reader by the lapels and shakes hard, telling us to wake up and get real, that it's not too late for us - and especially our surrogates in Washington - to heed the sound fiscal principles we know we must. This is a book that each and every adult should read and ponder.”

Bankrupt: A Society Living in the Future 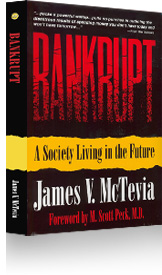 James V. McTevia has seen the ravages of debt addiction in every form, from every angle.

As a kid pushing a lawn mower to pay off his own impetuous debts. As a repo man, a bank loan officer, and a pioneer of the field of turnaround management. Finally as a nationally renowned business and management authority, James V. McTevia has dissected and dealt with the devastating consequences of crushing debt.

He knows first-hand the toll that irrational, excessive debt takes on people, institutions, and society.

In this all-too-prophetic book, McTevia offers an expert but common sense analysis of unrealistic debt.

M. Scott Peck, M.D., in his foreword to this book, explains why he regards Bankrupt: A Society Living in the Future to be “a mental health bargain for an enormous number of men and women who need to absorb the simple principles of fiscal sanity.”

Everyone who reads this book will see the consequences of personal, corporate and government indebtedness, the ultimate price tag for spending the wealth of future generations today.

“All those who are firmly convinced that it makes no sense for individuals, businesses, and government to repeatedly borrow, postponing the inevitable, will take great delight in McTevia's book… one of the most enlightening, informative, fun-to-read, right-to-the-point books you've ever seen on the subject of spending beyond your means.”